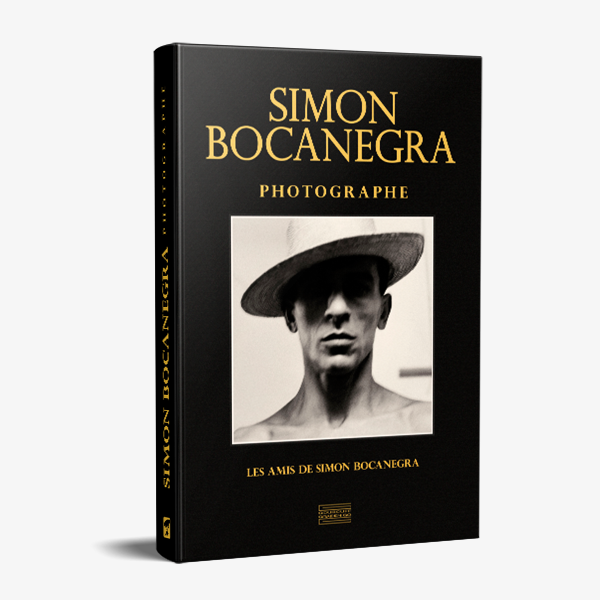 In his work the aura of the underground figures is on the same level as the Icons, the brilliance of old age has nothing to envy or fear from the splendour of youth, rich and poor are equal. The celebrated and the anonymous are both captured with the same discerning eye, transsexuals, drag queens compete to reveal their femininity and dandies show off the same arrogance as aristocrats.

On december 12th 2011, with his natural elegance, Simon Bocanegra decided to bow himself out. You might, as we did, have met this magician in Paris, London or New York. With his minimal photographic gear and his torero’s posture, he focused on people around the world, on fashion and on the underground during 30 years.
His work survived him and is now in Paris, in good hands. The founders of the association « Les amis de Simon Bocanegra » (Simon Bocanegra’s friends) who are closely related to him, have decided to join their efforts to promote his work to insure he earns the right place in the history of photography.
The association is a non-profit one. Its aim is to promote its work.

Show your support to the association and help elarging the circle of Simon Bocanegra’s friends by subscribing to the newsletter :

Self-portrait with hat of Simon Bocanegra

Alain Weill was curator of the Poster and Advertising Museum and also head of the Poster Festival in Chaumont.
An expert in fine art and great collector, he organizes auction sales and exhibitions in France and abroad. He is the author of an encyclopedia and has written many books about poster and graphic arts. He shared with Simon the essence of the Paris nightlife.

Jacqueline Germé worked in fashion. She was attachée de création then head of the Design Studio at Paco Rabanne. After that she set up her own business as a Fashion pilot, special consultant and personal shopper at the Bon Marché department store. She also published several books, among which are Alain Weill Sa garde-robe in 1989, L’Esthétique des situations en 2012, Simon Bocanegra Portrait et médaillon in 2014.

Bastien de Almeida is an expert in vintage clothes and he is fond of the great Hollywood era. In his concept store in the Batignolles district, one could find clothes and accessories as well as books about movie and magazines of the time. As a great collector, in 2009 he bought the photographic work of Simon Bocanegra and owns the rights.

Baptiste Magis, a graduate of the National Superior School of Decorative Arts (ENSAD) is an interior decorator, a computer graphic and cinema set designer.
He met Simon Bocanegra thanks to Christine Mingo, who is Simon’s muse. Fond of his images, he encouraged him and stood by him in his work to create  his first website with a view to publishing a book.

Charles Serruya is an artist with multiple talents. He is a photographer, a sculptor as well as a film maker. In his photographic work, he has explored the outlines of shadows in black and white and then in color. In his sculptures in wire or gold, the shadow develops another facet of his labyrinthic work. His movies convey, in a very personal fashion, his poetic identity.
A long-time friend, he had the privilege of having an artistic exchange with Simon Bocanegra.

Patron of The Arts

This portfolio is a representative selection of the different facets of Simon Bocanegra’s universe (The nightlife in Paris, London, New York, transsexuals, fashion, dandies, backstages, old stylish people, the Underground, celebrities and people in the street).

All these pictures were photographed with a Nikon camera, using 35 mm Kodachrome film and 24 X 36 mm color slides. Neither reframed nor touched up, these photographs were shot from life, always in situ. One can see the complete agreement of the models in their eyes. There is no stolen image in his work, even when it is a furtive exchange with strange faces.

The technique used, characteristic of his work, is « Open flash », which consists in having a long shutter exposure time using a flash. The result of this shooting is always a surprise because of the chance, fuzzy effect taken into account and of intended shadows. During the exposure time, the photographer or the model might slightly move, therefore, sometimes in some images one can notice a double exposure effect which creates a halation around the outlined figures.

After twenty years of an unfailing and ever closer friendship, this is the image that I keep of Simon and now wish to share with you.

That image is one of a man who led an adventurous and daring life with natural elegance and integrity in a merciless, violent, fiery world. He was complex, obscure and radiant. He was just as keen on poetry and philosophy as on associating with the most varied and turbulent circles. He was torn between two extremes. One was the uproar of life, the fascinating encounters which punctuate the night owl’s wanderings, the visions and ecstasies of the flesh and drugs. The other one was that of solitude, silence, enrichment through the reading of great literary works and familiarity with art and music. The ambiguous charm of his presence derived essentially from that duality of tastes and attractions. He excelled in all that mattered the most for him: his connections with the night life of the capitals and his withdrawal through reading. One could see in him all the stages of his experience rooted in a sensuality and a sometimes strange, disquieting, multi-faceted marginality – but his experience was also anchored in a demanding and refined culture. That culture was the source of all the wealth, subtlety and accuracy of his expression, in conversation as well as in his letters. Simon was a first-rate self-educated man.

Simon had two opposite sides which mingled together and made him a wonderful person. He seemed to wander around life and the world like a dancer, a juggler, an acrobat and a tightrope walker whose body had the gait, the sweeping and rhythmical gestures of one who could associate effortlessly a swift instinct and acute perceptiveness. He was both animal and angel – a superior animal and a dark angel –, and that is what preserved that kind of impure and dark purity which glowed deep inside his ambiguity, his ambivalence and his multi-faceted diversity.

Simon had lived intensely. He had traveled a lot. His activity as a press photographer had led him to meet many famous and original, sometimes remarkable figures, in the most diverse spheres. Thus he had acquired an insight into the world and a feeling for relating to people. This gave him unusual open-mindedness, a wealth of knowledge and strong intuitions. He loved life. He loved people. He had a fundamentally loving soul, always in alert, moved by desire. An attentive friend, he was tactful and courteous. And he was a deeply generous and selfless man. He would give. When he took, it would only be to give more and in the end he would not keep anything. He did not want to burden himself with any material belongings. He had turned his back on wealth and comfort. He was happy with very little, which allowed him to keep his freedom of mind.

However, over the last three years, something had changed in him. He had gotten rid of all manner of things, even of the books that his humble abode was full of. He no longer had any expectations in life. He had shut himself away, alone in a solitude haunted nearly only by the prospect of death. He was coming undone. He was inexorably withdrawing from the world. He was getting ready to pass away in dignity, clear-headed, clear-minded, serene. Nothing could prevent him from saying his farewells to the world. This is where he left us. We followed him till the end, and that is where we stand in remembrance and love.